We made it back home today, we stopped at our usual haunts in Sandbar Lake, the Thunder Bay KOA, Pukaskwa, Rabbit Blanket and Chutes on the way back.

The weather here in southern Ontario is steamy, 30+C temperatures and virtually no rain since we left home, the grass is really burnt up.

A few pictures of some wildlife on the lake at our daughter and son-in-law's place were taken during a boat ride:

There were lots of loons on the lake: 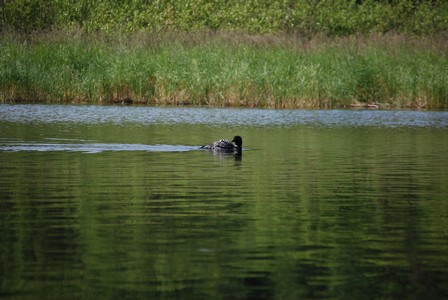 And some varieties of ducks: 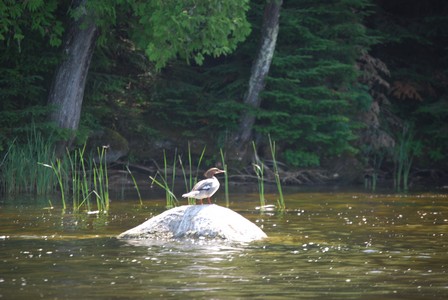 There are a pair of Bald Eagles on an island, we were lucky to get a couple of shots: 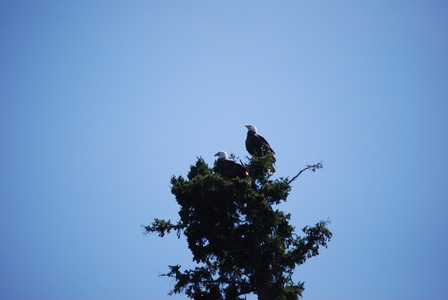 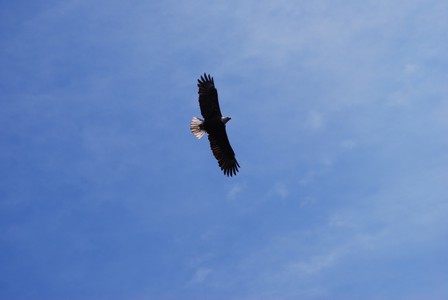 We had a great time up north, we look forward to going back up there again.

We couldn't resist posting some pictures of Rachelle and Kate. We are enjoying the time we are spending with them. 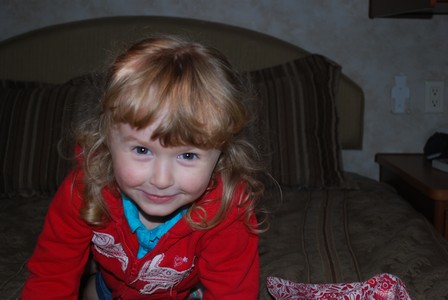 Look at the boats Grandpa! 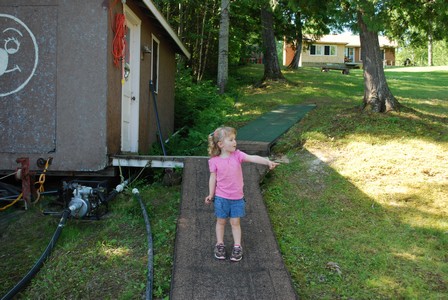 Kate enjoying the outdoors with mother 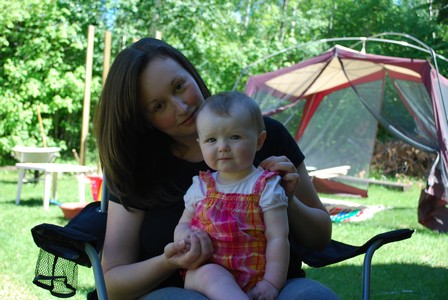 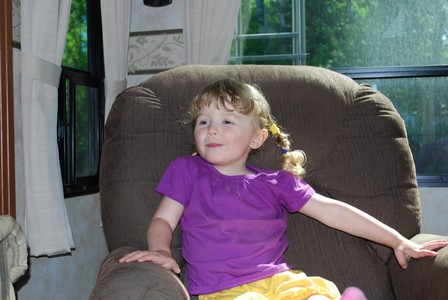 We plan to start heading south tomorrow, we will be without internet as the satellite equipment is staying up here for the summer, an update will be made from Thunder Bay when we will have access to wifi.

The weather here in the north looks great for the next week so we we look forward to some provincial parks.

We are comfortably ensconced at our daughter and son-in-law's place near ear Falls. It's right on a lake and the surroundings are great:

We are parked close to their garage, 30 amp power, water and sewer!! 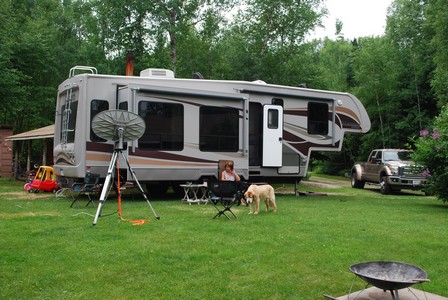 A view of the house and the lake: 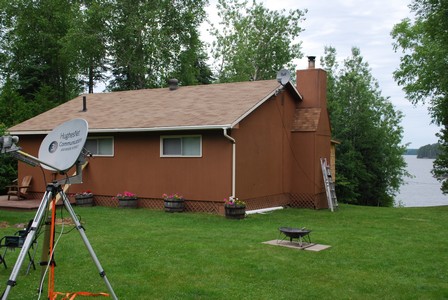 The view off the deck: 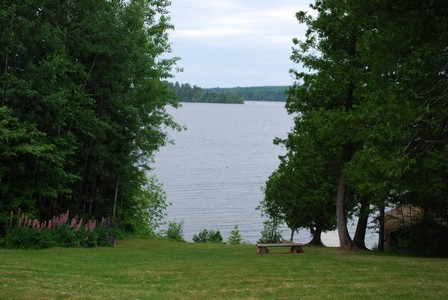 It's amazing how Rachelle has grown since we've seen her last: 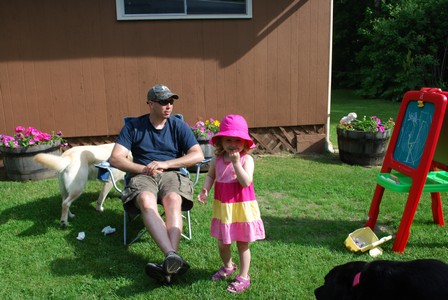 Kate is just getting ready to be mobile! 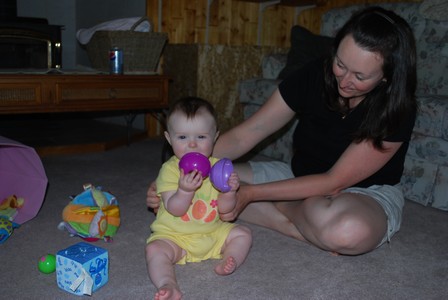 We expect to be here for a while yet, we will enjoy some great rides in the canoe!

We arrived here before noon (central time) and set up camp. It was sunny all day and we were able to have a BBQ and our first campfire of the trip. Just north of here there is a forest fire so we were surprised that fires were allowed.

We will spend today here and leave for the Red Lake area tomorrow morning.

What is that strange bright object in the sky??

We arrived here early yesterday afternoon. After packing up at Neys in the rain we arrived here in overcast conditions but the sky cleared and the sun came out, what a welcome change!! 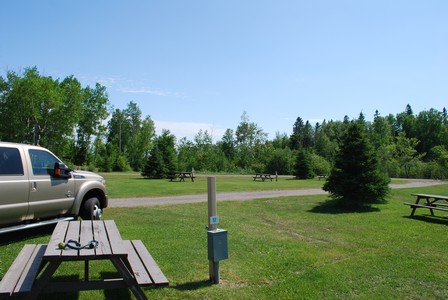 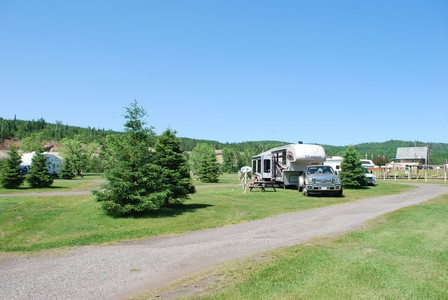 We actually had the air conditioning on yesterday afternoon in the camper as the front gets hit with the afternoon sun. Today we did some shopping in Thunder Bay and we will head for Sandbar Lake tomorrow.

Moved down the road!

Today we packed up and said goodbye to our friends Frank & Lucy and we moved a few kilometers west to Neys Provincial Park. It was dry at Pukaskwa when we packed up but it's been raining off and on since we arrived here at Neys. We are hoping that the rain stops long enough so we can do some walking around outside!

We will probably head into Thunder Bay tomorrow.

We arrived here yesterday after the short run from Rabbit Blanket. Yesterday was a perfect day, sunny with enough wind to keep the bugs at bay. We enjoyed the day, Kasey got 3 dips in the lake and loved it and the BBQ was brought out for some great burgers. We also renewed acquaintances with Frank and Lucy who have been hosting here at Pukaskwa for a few weeks.

Today we are having an indoor day due to the rain, but we dropped into Marathon for some shopping.

Tomorrow we will head out and spend a day or two at Neys PP depending on the weather, then it's off to Thunder Bay.


We arrived here just after 2:00 pm after a very nice run. There was virtually no traffic and we made good time. The diesel prices here are about the same as in the south so we aren't suffering from the price disparity that we've seen in previous years.

The bugs here are heavy, the overcast weather probably isn't helping. When setting up the camper, Al's legs took on the appearance of the arm in the TV commercial, you know the one where the arm was placed into an enclosure filled with mosquitoes. We still have a quarter bottle of the 90+ percent DEET, it worked great while finishing the camper set up but Al doesn't smell very good!

There are only about 3 or 4 campers in the park, most of them are serious tenters.

A couple of pictures: 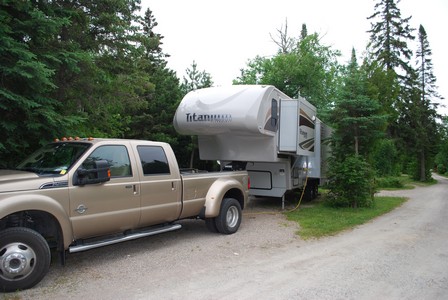 A couple of the sites have been improved to allow larger campers to get in: 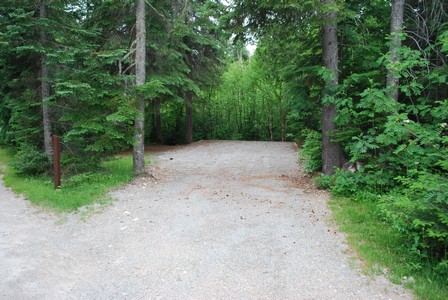 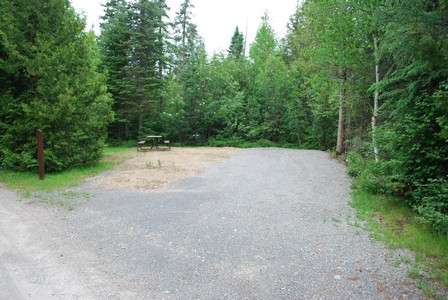 We arrived here yesterday afternoon after an uneventful run from home. The weather is great, warm temperatures and sun. The diesel fuel prices are the same up here as in the south, another bonus.

We leave for Lake Superior this morning.

We have been at home about 2 months now, while we really enjoy being at home it's also nice to take a break and hit the road again. We've spent the time at home renovating the den in the basement, it's almost finished. When we get back from up north we just need to finish the drop ceiling and put new baseboard in, then we can move furniture back in.

We've been unloading 30+ years of books, but there are still about 500 or so to get rid of. It makes us sad just to take them to the dump, we may try a garage sale after we return so that the books get re-used. Al has made a vow not to buy any more physical books, E-books are a much better alternative!

Our plans are to take a leisurely run up to Red Lake to visit our daughter and her family (including our new grand daughter who we haven't seen since last fall!). We will stop for a couple of days in Pukaskwa National Park to enjoy the scenery and say hello to Frank and Lucy again.